The Shiseido Group including the Company has established BEAUTY INNOVATIONS FOR A BETTER WORLD as OUR MISSION in its Corporate Philosophy THE SHISEIDO PHILOSOPHY, and defines the corporate governance as our “platform to realize sustainable growth through fulfilling OUR MISSION”.
The Company strives to maximize medium-to-long-term corporate and shareholder value by implementing and reinforcing corporate governance to maintain and improve management transparency, fairness, and speed, and by engaging in dialogue with all stakeholders, from consumers, business partners, employees, and shareholders to society and the earth. At the same time, by fulfilling its responsibilities as a public entity of society, the Company works to optimize the value it delivers to respective stakeholders.

Directors and Audit & Supervisory Board Members

Members of Directors and Audit & Supervisory Board Members since March 25, 2022

Of eight directors, four members (50.0%) are highly independent external directors who meet the “Criteria for Independence of External Directors and Audit & Supervisory Board Members” of the Company. The directors include three females (37.5%).

Skills and Expertise Required of Directors and Audit & Supervisory Board Members

Skill Matrix of Directors and Audit & Supervisory Board Members（As of March 25, 2022）［PDF：1.48MB］ 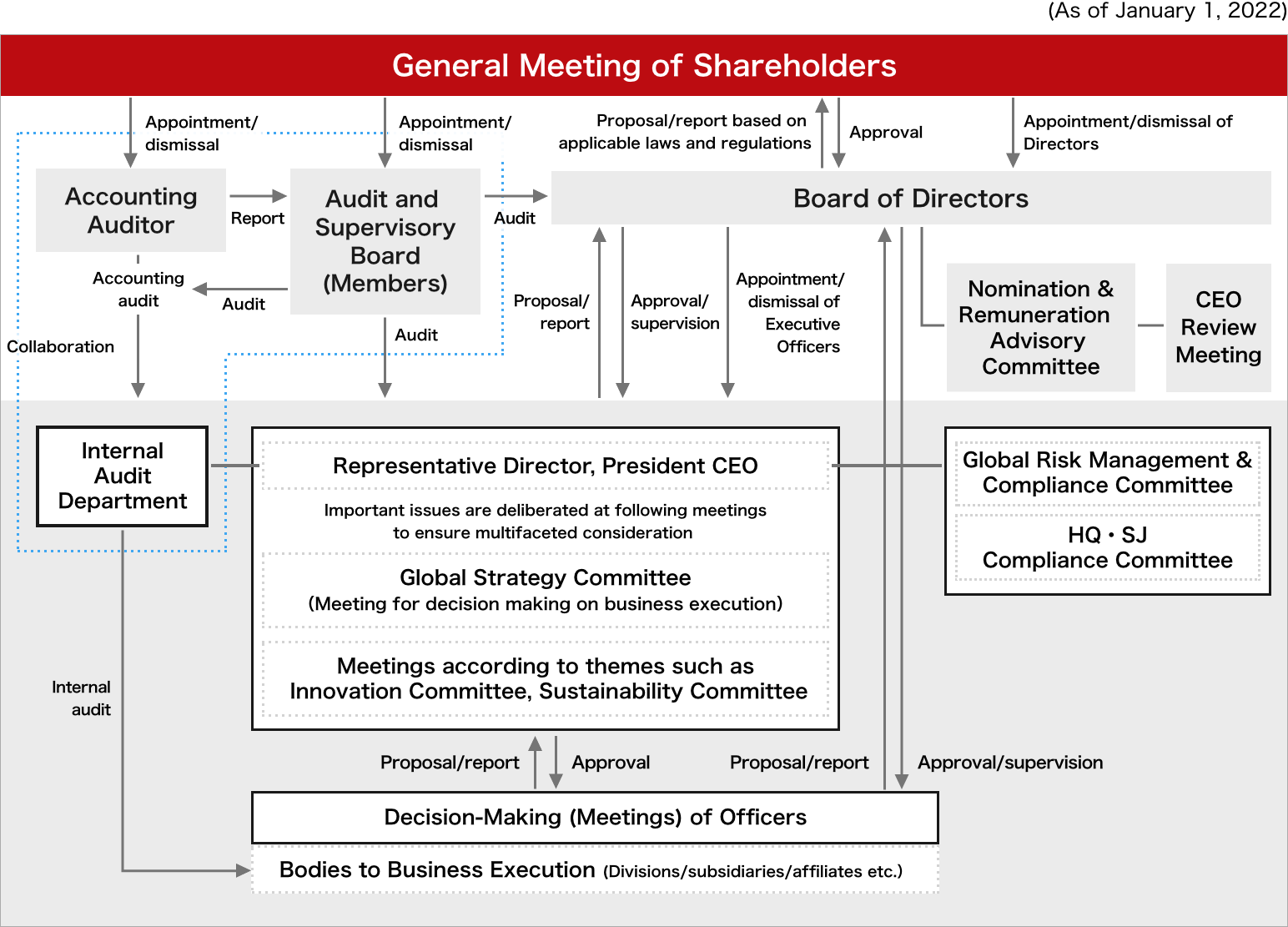 Shiseido’s Board of Directors is structured to be small for quick decision-making. It is composed of eight members, including four external directors and presided by the President and CEO. The Board of Directors meets approximately once a month to discuss all significant matters.
The Company has adopted an executive officer system, placing its business execution function under the control of executive officers and separating it from the supervisory function, the responsibility of the Board of Directors. On top of that, we have the “Global Strategy Committee”, which deliberates on organizational reform, new businesses, brand launches, and other matters particularly important to the Shiseido Group. and other matters. This committee is chaired by the President and CEO.

At the same time, we are working to delegate authority to executive officers, clarify their responsibilities, and accelerate business execution. Executive officers make decisions regarding the execution of business in their areas of responsibility and deliberate matters to be proposed to the Board of Directors.
In order to ensure that our Board of Directors maintains an independent perspective and further strengthen its supervisory function over business execution, in 2006, we appointed two highly independent external directors. Currently, the number has been increased to four.
Among the four internal directors, two have built careers outside of Shiseido: one as a corporate manager, and the other as a financial officer; while the remaining two have had long careers in Shiseido: one having expertise in various brands of the Company as well as new business development, and the other possessing knowledge and experience in such fields as marketing, product development, finance & accounting, and supply network. We believe that such composition ensures diversity of the Board of Directors. We also appoint younger members as executive officers, thereby aiming to strengthen the executive function.