Development of technology for sunscreen

■Research on applied film for sunscreen that "remains effective even when it comes into contact with sweat and water, with enhanced UV protection"

With conventional sunscreen technologies, the UV protective effect of sunscreen would inevitably be attenuated when it comes into contact with sweat and water. Our research and development efforts have thus been directed toward how best to suppress this attenuation. Focusing on minerals and other components in water and sweat, Shiseido started a new research and development project from a different angle: "is it possible for the sunscreen layer on the skin to exhibit increased function upon contact with water and sweat, and thereby produce an enhanced UV protective effect?"
We focused on the relationship between minerals, such as calcium ions and magnesium ions, contained in tap water, seawater, and sweat, and the components that form the sunscreen layer.
This led to the discovery of the "ionic mineral sensor," and the successful development of technology for sunscreen – when combined with mineral ions in water and sweat, the water-repellent property of sunscreen increases, and moreover, the sunscreen layer on the skin becomes resilient, smooth, and uniform in thickness, thereby providing an enhanced UV protective effect.

■The environmental impact of sunscreens.

●A Study on the effects of UV filters on coral

Shiseido conducted joint research with Associate Professor Takashi Nakamura of the Faculty of Science, Ryukyu University, Japan. Professor Nakamura is actively conducting research related to reef-building corals and coral reef organisms. Shiseido scientists conducted research to assess the impact of each UV filter used in our products on two types of corals – the soft coral (Alcyonacea) and hard coral (Scleractinia) -- collected under the special permission of the prefectural governor based on the rules of Okinawa prefecture. The research focused on the changes in the maximum quantum yield of photosynthesis*1 in the symbiotic zooxanthellae of the corals*2, as well as the coral polyps’ expansion and contraction under experimental treatments.

At the same time, Shiseido scientists used an in silico evaluation model to elucidate a worst-case ocean elution scenario of using Shiseido's water-resistant sunscreens for leisure. The simulation assumes overconservative conditions with the largest number of swimmers in midsummer*3. Tokyo Bay was used as the model in the risk assessment. This is a model developed by the National Institute of Advanced Industrial Science and Technology. This model is used in detailed risk assessments by governments, businesses, universities, etc. and multiple reports and papers using the model have been submitted.

From the results obtained from the above, it is considered that the impact on coral colonies in the ocean when using Shiseido water-resistant sunscreens for leisure is insignificant even under exaggerated conditions. Shiseido is committed to developing products that can protect the skin from harmful UV rays while trying to minimize the impact on the marine environment.

In promoting the research and development of cosmetics that realize a comfortable feeling, Shiseido has succeeded in the development of a material (new water-soluble polymer) that achieves an unprecedented comfortable feeling with the feature of “being rich and bodied in texture and blending smoothly into the skin during use, with a non-sticky feeling after application.”
Polymers, whose wide-ranging applications include adjusting the feel of cosmetics, etc., can be created in various sizes by bonding single molecules (polymerization). In general, appropriate size of larger polymers create a rich, bodied texture. However, the conventional polymerization method involves excess size of molecules, resulting in a slimy, sticky texture, which is problematic for cosmetics.
Now, by applying a special new polymerization method, the length of polymer molecules can be made moderately uniform, and after 6 years of development, the polymer that is both rich and smooth in application was finally created.
Moreover, it has been quantitatively confirmed that this polymer blend base provides a comfortable feeling based on sensory engineering and neuroscience.

■Development of "Core-Corona Emulsification," a novel emulsification technology that allows mixing of oil and water freely

Shiseido developed a novel “core-corona emulsification” technology that allows versatility in mixing oil and water. This technology gives freedom in choice of oil and its composition ratio for emulsification without using surfactants, which are commonly used in the conventional emulsification technology. This new technology is expected to offer innovative cosmetics formulations such as “sunscreen with a dewy refreshing texture and high water-resistance” and “highly effective moisturizing cream without a sticky feel” – functions that were hard to balance with conventional technologies.

■Use of an electron microscope "cryo FIB-SEM" to realistically observe microstructures of cosmetic product content, applied layer, and inside the hair

In order to observe the microstructures of cosmetics, we developed an observation technique using the latest electron microscope "cryo FIB-SEM." Since this observation technique makes it possible to observe samples at high magnification while preventing damage to the utmost limit by instantly freezing the samples, we can now observe emulsified particles in cosmetics and the dispersion state of powders "realistically," "in their true colors," and in nano order. In addition, the technique allows for detailed observation of the condition of the layer that forms when cosmetic material is applied on the skin (applied layer), as well as changes in the structure inside the applied layer. Furthermore, since it is now possible to capture 3D images of biological samples, the condition of biological samples can be observed. It is also widely used to evaluate the usability of cosmetic products.
These analytical technologies support basic research and development of cosmetics, and are being provided to our customers as easy-to-understand information. 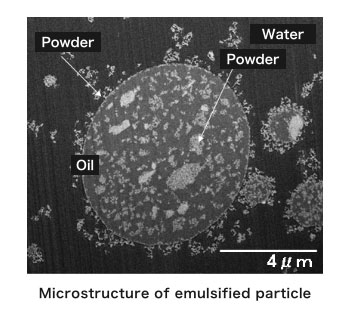 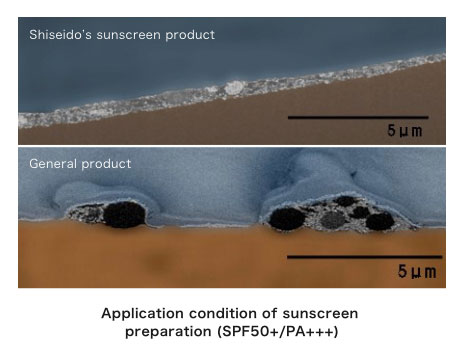 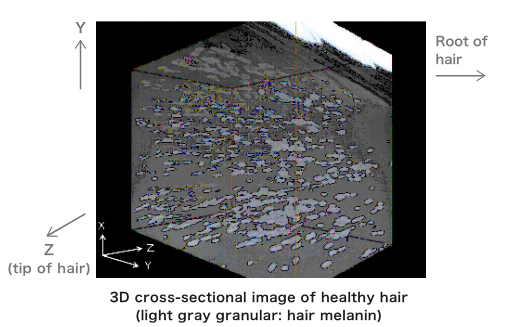