The first research in history to win awards in two consecutive Congresses! A cavitation was found inside sagging skin!?

A cavitation was found inside sagging skin!?

Shiseido discovered that sagging is caused by cavitation of the dermal layer associated with aging.
The mechanism of sagging has finally been disclosed!

Human beings experience a decline in various physical functions with age, such as in the muscles and bones. Sagging is another example of this, and facial sagging is particularly undesirable because it gives a more aged appearance. In the award-winning research in 2014 (Poster Award), we clarified the internal structure of the face that provides support to the skin; however, in this research, we focused on the skin to elucidate the mechanism of how sagging occurs in the skin. Although little was known about sagging previously, these two discoveries have revealed the whole picture of the mechanism behind sagging.

We succeeded in capturing special light to photograph the moisture. Based on this finding, a system of two cameras was developed to provide wide-area images of the moisture in the face, as well as imaging of the micro area moisture, as small as a single skin grain. 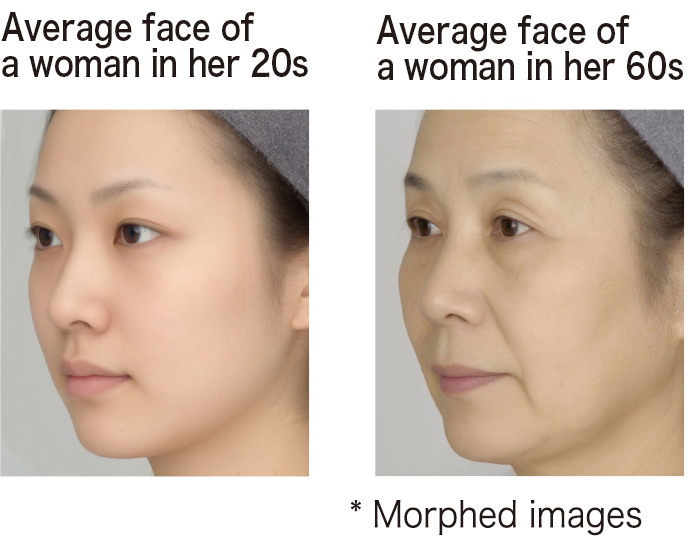 The dermal layer, which is located underneath the skin surface, is packed with collagen and provides the skin with resilience. The research that won the award on this occasion revealed that much of this important dermal layer is lost in aged, sagging skin. The dermal layer becomes hollow with age, which then causes the loss of resilience in the skin and the inability to support the face, finally resulting in sagging. Since the state of the lost dermal layer appears like a cavity, we decided to refer to this phenomenon as “dermal cavitation.” In addition, this dermal cavitation phenomenon was found to be closely related to the sweat glands, the organ responsible for the secretion of sweat. Sweat glands are found all across the body and are normally located deep inside the dermal layer where a meshwork of collagen that maintains skin elasticity is found, and the secreted sweat travels through narrow tubes to the surface of the skin.
An investigation with a focus on the locations of dermal cavitation showed that these sweat glands had shrunk and had migrated towards the skin surface. A large mass of the dermal layer was lost after the migration of the sweat glands and replaced by white subcutaneous fat, producing an appearance similar to cavities. Therefore, it was found that the shrinking of the sweat glands caused the dermal layer to become hollow and lose resilience, leading to the inability to support the skin overall and the resultant sagging.

How was this discovery made? Why is it significant?

The ASAXA-CT method was developed as original technology for analyzing the internal structures of sagging skin. The phenomenon of dermal cavitation was discovered and the relationship to the sweat gland was clarified!

In order to find the cause of sagging, the inside of sagging skin must be observed. However, there is a challenge that has been raised in previous award-winning research on how to observe the internal structures deep inside the skin. In the current research, we solved this difficult issue by developing a special analytical device for observation inside the skin based on the CT method used in the area of medical care.

You may be familiar with CT from situations such as health checks; however, the CT for medical use is not able to provide a clear picture of the soft matter inside the skin. For this reason, we developed the special analytical ASAXA-CT method (patent under application) as an original technology compatible with the internal structure of the skin.
As a result of observation inside the skin by this new method, we managed to discover dermal cavitation and the relationship between sweat glands and sagging, which were not known previously. 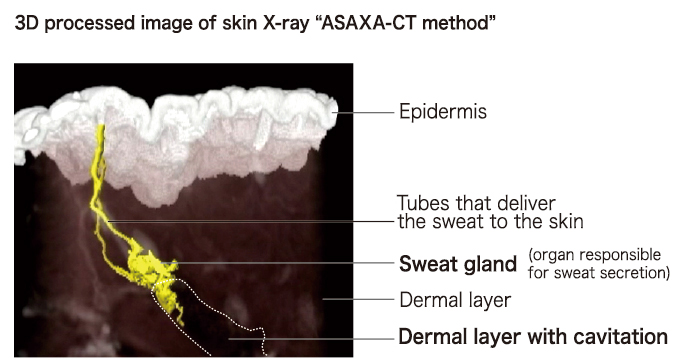