Dryness may sound simple, but differs that much by facial parts!

Development of a camera system that clearly reveals the moisture distribution in the face! 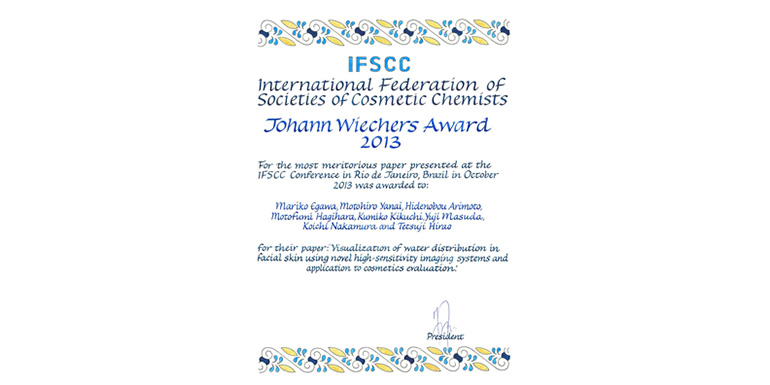 A two-camera system to visualize the moisture in the skin by simple photography!
System 1: Whole-face image -> Shows the parts of the face where moisture is rich or lacking
System 2: Micro-imaging of skin surface -> Shows how moisture permeates into the skin

Cosmetic shops have devices that measure moisture and skin texture by applying a skin scope on the face. Such equipment is very useful in capturing the current state of the skin, so the information can be used as reference in future skin care. These devices use electrical resistance to calculate the moisture in the face based on the state of skin texture but they do not actually measure the moisture content itself. However, in order to develop effective skin-care products, the amount of moisture needs to be calculated more accurately. The new camera systems made this possible.

We succeeded in capturing special light to photograph the moisture. Based on this finding, a system of two cameras was developed to provide wide-area images of the moisture in the face, as well as imaging of the micro area moisture, as small as a single skin grain. 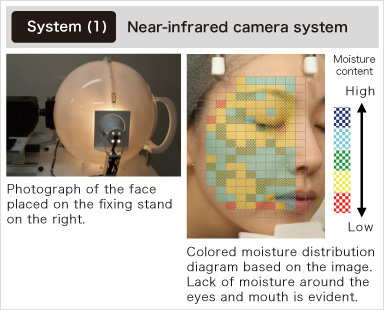 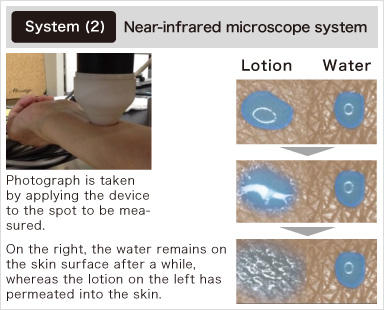 This near-infrared ray camera shows water and oil as black in the photograph. The camera system that we have developed applies color according to the concentration of moisture and prepares a distribution diagram understandable at a glance. 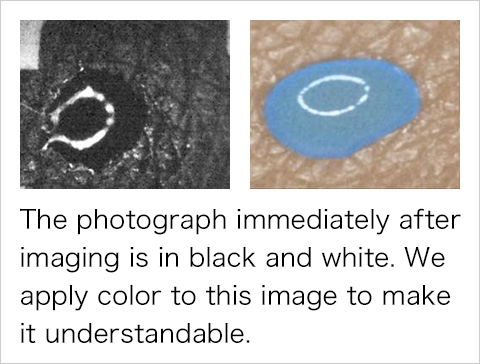 What’s possible with this technology?

Contributing to the development of cosmetics and beauty therapy that will gently moisturize and beautify the skin!

These systems help to develop new methods of skin care by investigating the effects of new products, as well as accurately tracking the state of skin dryness. For example, these systems have demonstrated and proved that lotions permeate better into the skin when applied with cotton pads rather than with hands, and that the season for the driest skin is autumn rather than winter. Unfortunately, these systems are still very expensive. If the cost goes down in the future with technology advance, you may see your own moisture distribution diagram in stores. Until then we will use them to develop moisturizing products that work gently on the skin.