What are the causes that accelerate skin roughness and aging? Finally, an answer to a 50-year-long question!

Prevention of aging is no longer a dream! 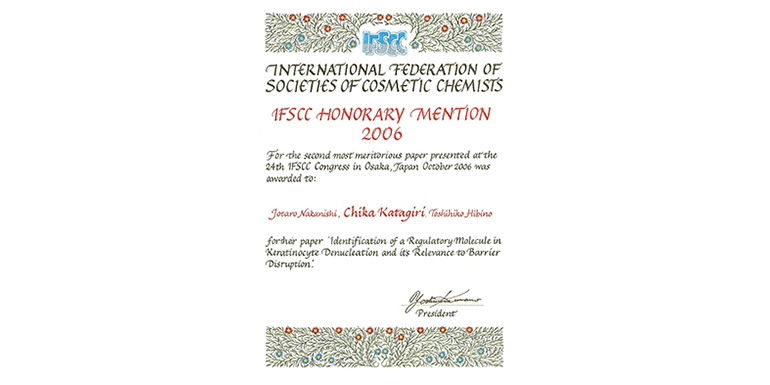 Discovery of the “bad” protein - serpin b3 - as the cause of acceleration of skin roughness and aging! The component to combat this was developed from further research!

Many people imagine pigmentation, wrinkles, and sagging as examples of skin aging. These signs are caused by a combination of factors; however, the most widely known ones are photoaging due to ultraviolet light and skin roughness due to dryness. The stratum corneum on the skin surface provides a barrier to protect the inside of the skin from external stimuli. At the stage where the cells generated in the deepest part of the epidermis become the stratum corneum, the nucleus in their center disappears and the cell is filled with hard protein to form a barrier.

However, when the skin condition deteriorates, the nuclei remain and the cells cannot be filled with hard protein. As a result, the barrier function is decreased and the external stimuli affect the inside of the skin, accelerating the aging process. This phenomenon had been known for about 50 years; however, the mystery of why the nucleus remains could not be solved. This award-wining research was the first to finally succeed in identifying the causative factor inhibiting nucleus degradation―the “bad” protein serpin b3. 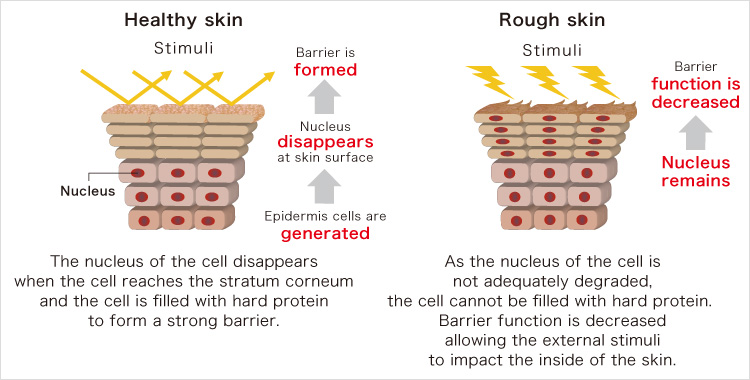 What are the negative impacts?

Decreased barrier function allows ultraviolet light and dryness to reach directly into the inside of the skin. As a result, aging is accelerated dramatically!

Serpin b3 is a protein that is rarely found in healthy skin but increases rapidly when the skin condition deteriorates. For this reason, the amount of serpin b3 is low in the skin of the abdomen or inside of the arm where ultraviolet ray exposure is low, while it is produced in high amounts in the skin constantly exposed to ultraviolet light and dryness, such as the face. More than that, serpin b3 not only inhibits the degradation of cell nuclei in the skin surface but also produces many factors that harm the skin, causing the surrounding cells to deteriorate as well. Furthermore, the studies of the stratum corneum cells from about 2,500 people from 18 countries around the world confirmed the “bad” protein serpin b3 to be a universal negative factor.

Further research has developed amino acid derivatives to suppress the generation of this “bad” protein serpin b3.