Something needs to be done about open and visible pores!

Women’s second most common skin problem of visible pores can be resolved!

How Can We Improve the Appearance of Conspicuous Facial Pores? 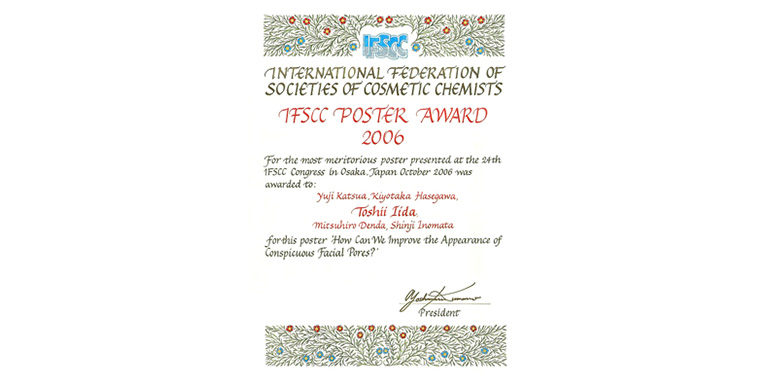 Visible pores rank second in skin concerns for women. We identified the cause of visible pores and developed an active component to resolve this problem. This is a starting point for cosmetic products to combat open pores!

Visible pores rank as one of the top skin problems for women today. In the survey conducted at the time of this award, they ranked second after pigmentation and freckles. The phenomenon of visible pores involves blackheads on the nostrils, sagging pores that look vertically elongated and are often observed on the cheeks, and open pores when the pores become larger and more conspicuous. As to open pores, no basic research had been conducted on the mechanism or the reasons behind this phenomenon.

This award-winning research elucidated the actual conditions of opening of pores, leading to the development of methods to improve the condition. As we started the research to find out what open pores actually were, unexpected findings were made. Visible pores were not larger pores but cone-shaped, as if the skin around the pore had been removed.

If we look at visible pores from the top, the pores actually look larger. However, a cross section of the area around the pore shows sloping of the surrounding skin, forming a cone shape. Exposed to light, the dip in the skin casts shadow, making it appear as though the pore has opened.

The skin around the pore was rough! The cause of the skin roughness was investigated to bring it back to healthy state

Why is the skin around the pore cone-shaped? Studies of the skin around visible pores revealed that the skin was in the same condition as rough skin. For this research, we divided women in their 20s and 30s into three groups for comparison: those with visible pores, those with inconspicuous pores, and those in between. As a result, people with visible pores were found to have large amounts of sebum secretion. Sebum contains various components, but the people with visible pores had a high ratio of a component called unsaturated fatty acid. Direct application of unsaturated fatty acid on the skin caused roughness, thus it was demonstrated to have a negative impact on the skin around the pores. In further research, unsaturated fatty acid caused sudden changes in the epidermis. The cells of the epidermis have many inlets and outlets for exchanging substances with the environment. These inlets and outlets are not always open, and can be put on and off like a switch. Unsaturated fatty acid changes the switch of inlet/outlet for the positively charged substance called calcium ion to on, causing the level of calcium ion in the cell to increase. This triggers the cell to secrete a separate inflammation-causing signal, resulting in deterioration of the skin condition.

If unsaturated fatty acid changes the switch of inlet/outlet for positively charged calcium ion to on, we looked for a component that changes the switch of inlet/outlet for negatively charged substance to on, in order to neutralize the positive charge in the cells. As a result, we identified glycylglycine as a suitable substance. In a test where the subjects used a solution formulated with glycylglycine for two months, actual improvement was observed for conspicuous pores. In addition, glycylglycine, which is formed by the linking of amino acids, was found to have a high moisturizing effect.
This award-winning technology was put to further research, with glycylglycine itself undergoing evolution at present. This research is a great advance in offering solutions for people with visible pores concerns.