Perseverance with skin care used to be the key, yet...

Ideal foundation makes you look younger with one application! 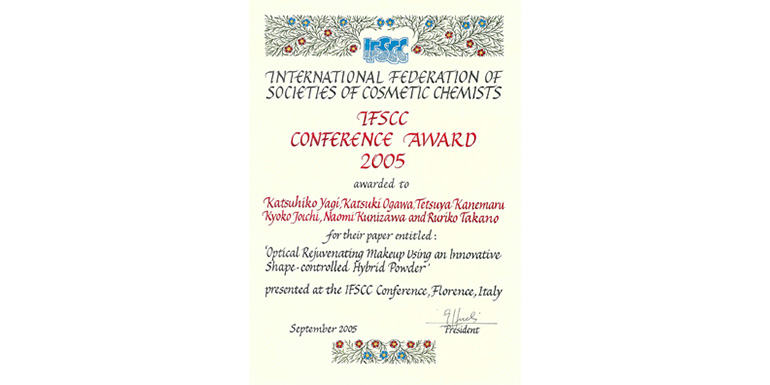 The main functions of foundations were to conceal unevenness in skin color (such as pigmentation and darkening) and cover roughness of the skin (such as pores). Of course, it is possible to achieve a younger look this way; however, skin care is necessary when it comes to tightening a sagging face. While women continue putting effort into daily care, they truly wish to eliminate skin problems. This research developed a special powder to control light in such a way that a sagging face line looks sharp. The result of the investigation formulating this powder in foundation showed that one can look 10 or more years younger. 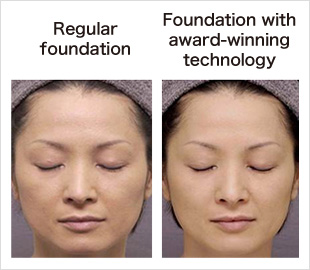 Inspired by the reflector board used for photographing and filming models and actresses, we formulated a special pearl pigment to make the shadow of the face line disappear with light!!

The skin of models looks so beautiful! When we considered what makes it look that way, we noticed that a white or silver reflector board is used to conceal shadows from sagging skin and pores. With this reflector board as inspiration, we focused on a pearl pigment to reflect light. Plate-like pearl pigments have been used in glittering eye shadows and nail polish before; however, their inclusion in foundation makes the skin shiny because of the excessively strong light. Therefore, we aimed for a board similar to the reflector board on top of the pearl pigment to create a soft brightness without glare. This means that areas that look flat to other people (such as forehead) exhibit bright light from the front, whereas sagging areas (such as face contour) are surrounded by light from the sides, resulting in a soft and bright effect with sharpness.

To achieve the redness essential to beautiful skin, we used a red-colored pearl pigment 20 to 30 microns in size, which is about 1/10 of the diameter of the hair. Since it is technically very difficult to place a reflector board on top of this, seed-like substances were implanted in the pearl pigment, which eventually grew as crystals to stand upright on the skin like a board. 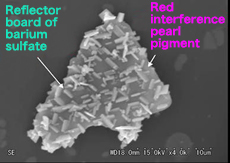 This special technology and the demonstration of the younger look from image analysis received commendation and led to the receipt of this award. This award-wining technology is used in SHISEIDO REVITAL Lifting Pact marketed in August 2004. When the product was marketed, it was applied to one half of the consumer’s face to be compared to the foundation they used. Consumers immediately noticed the face line actually lifting up, which contributed to the popularity of the product. This technology has been researched further afterwards, and the advanced version has been utilized in products such as Advanced Hydro Liquid Compact and Radiant Lifting Foundation by Shiseido Makeup.