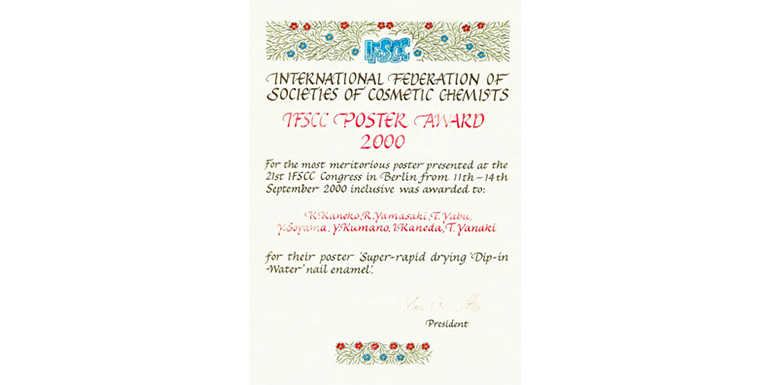 Change in thinking led to innovative nail enamel that dries in just 45 seconds by immersion in water!

Have you experienced the stress of redoing nail enamel on your fingers or toes because you accidentally hit or touched something while it was drying? Women have various demands for nail enamels, including long-lasting, lustrous finish, color and the look on nails—but quick to dry beats them all. This award-winning technology incorporates a novel idea for quick drying. The change in thinking resulted in a major contribution to this technology. Generally, nail enamels are made of a coating material to solidify, solvent to dissolve the coating material, and a colorant for color as main components. When applied on the nail, the solvent vaporizes and causes the coating material to form a membrane and solidify, which we call “drying”.

It took a year to generate the idea. Further difficulties at the development stage! Discovery of instantly drying substances with a shift from vaporizing to removing with water!

The key point in this award-winning technique was to remove the solvent with water. Therefore, the first difficulty was in discovering solvents to dissolve the water-insoluble coating material. There were no compatible substances previously used in cosmetics; we spent a year discovering the appropriate substances from ingredients in every area possible. And, there were further difficulties. The solvents we managed to discover were soluble in water, but the coating material had poor stability after the instant removal of solvent compared to its gradual vaporization, resulting in whitening and exfoliation. This was the start of many days of investigation. In addition to safety, consideration was required for the environment as the product is immersed in water. Furthermore, since it becomes unusable in places without water, we needed a product that would vaporize and dry over the same time as traditional nail enamels.

As a result of resolving these problems, we finally developed nail enamel that dries when immersed in water. This technology was applied to Shiseido S Aqua Dry Nail in November 2000 and has been used in many products such as Kesho Wakusei. In addition, the findings on coating and solvents cultivated in this research have been used in the development of other products including lipstick and mascara.