The phrase “white tinge” originated from this research!

Birth of a marvelous foundation with changing color 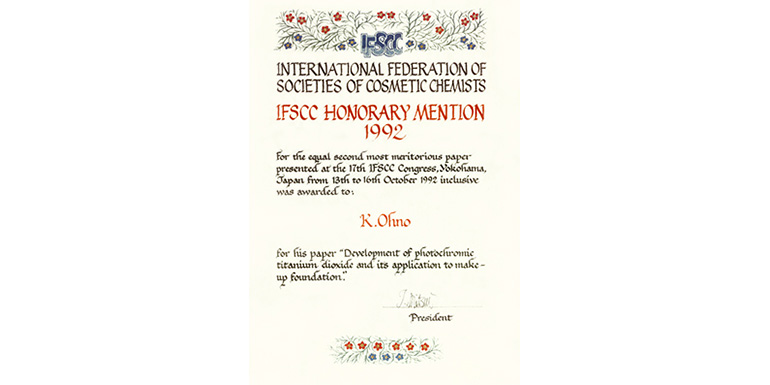 Development of a foundation without white tinge on the face, which darkens outside where the light is strong and returns to the original color indoors!

Have you experienced what you thought was the perfect finish to the foundation in the morning, with your face appearing unnaturally white outside? In the 1990s when this award was received, this phenomenon was called white tinge. This award-winning technology was the origin of the phrase.

Normally, foundations are formulated with powder that reflects light for brightness and covering the imperfections of skin. For this reason, the face looks unnaturally white outdoors where the light is strong, even if it looks natural when the foundation is applied indoors in the morning. This effect was discovered when we stepped outside to check the color of the foundation under development. The phenomenon is more apparent when the foundation is applied in thick layers to cover skin problems and uneven coloring (such as pigmentation and freckles).

With this finding as the inspiration, we developed a foundation that changes color: it darkens outdoors where the light is strong and brightens indoors. The resulting foundation was ideal since it prevented white tinge and became a hit.

How do the colors change?

Application of “photochromic phenomenon” where the color changes with the light and development of a safer product for use in cosmetics!

Various substances used in a range of products change color when exposed to light. However, such substances had never been used in cosmetics applied directly to the skin. We developed a very safe substance—photochromic titanium oxide. A photochromic phenomenon is when a substance changes color if exposed to light and returns to the original color in dark places. Photochromic titanium oxide offers this function. Titanium oxide is widely used in cosmetics and has a high level of safety; besides, if processed under high temperatures it changes color slightly depending on the intensity of ultraviolet rays. 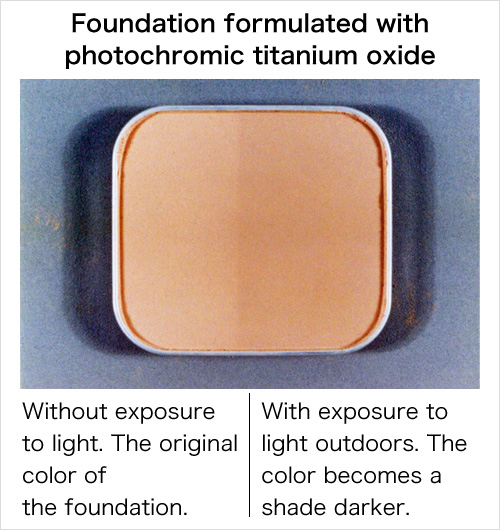 However, there were still difficulties. It was not good for an ochre 10 foundation to darken to ochre 30, so we made numerous adjustments aiming at a color change between ochre 10 and ochre 20, finally reaching approximately 15. The resulting photochromic titanium oxide was famous as a photo-responsive powder and was used in clé de peau BEAUTÉ, ELIXIR, Premier, and UV White, becoming popular for its ability to provide a natural finish any time with the raygenic effect* without white tinge. Also, a healthy redness effect was later added to the powder as part of its evolution.