How to cope with unpleasant body odor...

Birth of a deodorant eliminating body odor even after it’s there! 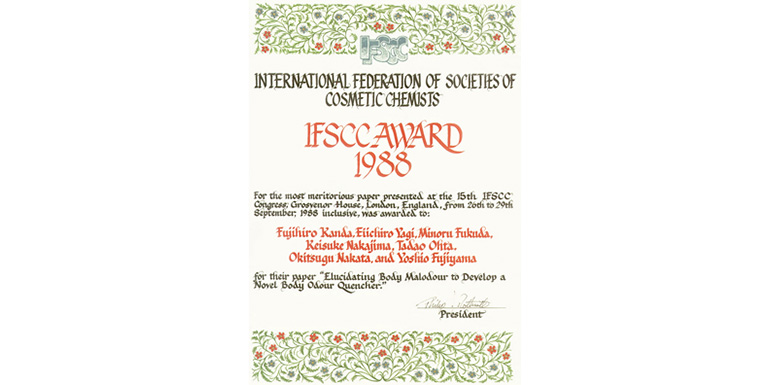 The cause of sweat odor has been clarified! Development of a deodorant that not only prevents sweat but also removes the odor from the source even after it’s there!

Many people use deodorants mainly in summer, and these products had already been marketed in the 1980s when this award was received. However, those products did not eliminate odors, but prevented sweat and odor using antiperspirants and antibacterial agents or else masked the odor by means of citrus or floral fragrances.

This award-winning study identified the cause of odor in sweat and then explored components to combat it, eventually resulting in the development of a component that could eliminate the odor at its source. We created deodorants that both prevented and eliminated odors if present.

Why does sweat smell?

The bacteria on the skin were responsible for the odor!

The bacteria on the skin, called the natural bacterial flora, degrade organic compounds in sebum and sweat on the skin to create different odorants. The result of this process is the source of the odor. Previous deodorants eliminated bacteria to prevent the generation of odor; however, this is not effective once the odor has already formed.

Many types of compounds are produced from the degradation of organic matters by the natural bacterial flora; therefore, it is difficult to pinpoint the cause of the odor from such compounds. In this research, we postulated that amongst others, short chain fatty acids strongly contributed to the odor because of their sour, vinegar-like smell; and this hypothesis was demonstrated to be true through various experiments.

As a result of such experiments, we found people with odorous sweat and people with faint or odorless sweat. Although the sweat from both types of people contains short chain fatty acids, the fatty acids in people with odorless sweat were found to exist in their odorless metallic salt form. Built on this finding, we found that zinc oxide was effective in neutralizing short chain fatty acids hence removing odor. However, zinc oxide readily aggregates. At the time of winning the award, spray type deodorants were the mainstream product form, and zinc oxide could easily clog the nozzle of the spray. So, we developed a composite powder of a spherical synthetic resin whose surface is coated with zinc oxide, thereby resolving the issue of clogging.