For researching emulsification technologies, there are 3 aspects to be considered; type of emulsion, size of the droplets of dispersed phase, and the structure of the interface of oil and water. Shiseido has been taking the lead over other companies in research and development for all of the above points.
Now Shiseido can control any kinds of characteristics of emulsions, such as appearance, texture, the effectiveness of pharmaceutical agents to provide products which satisfy consumers. 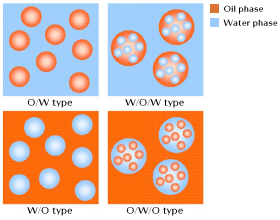 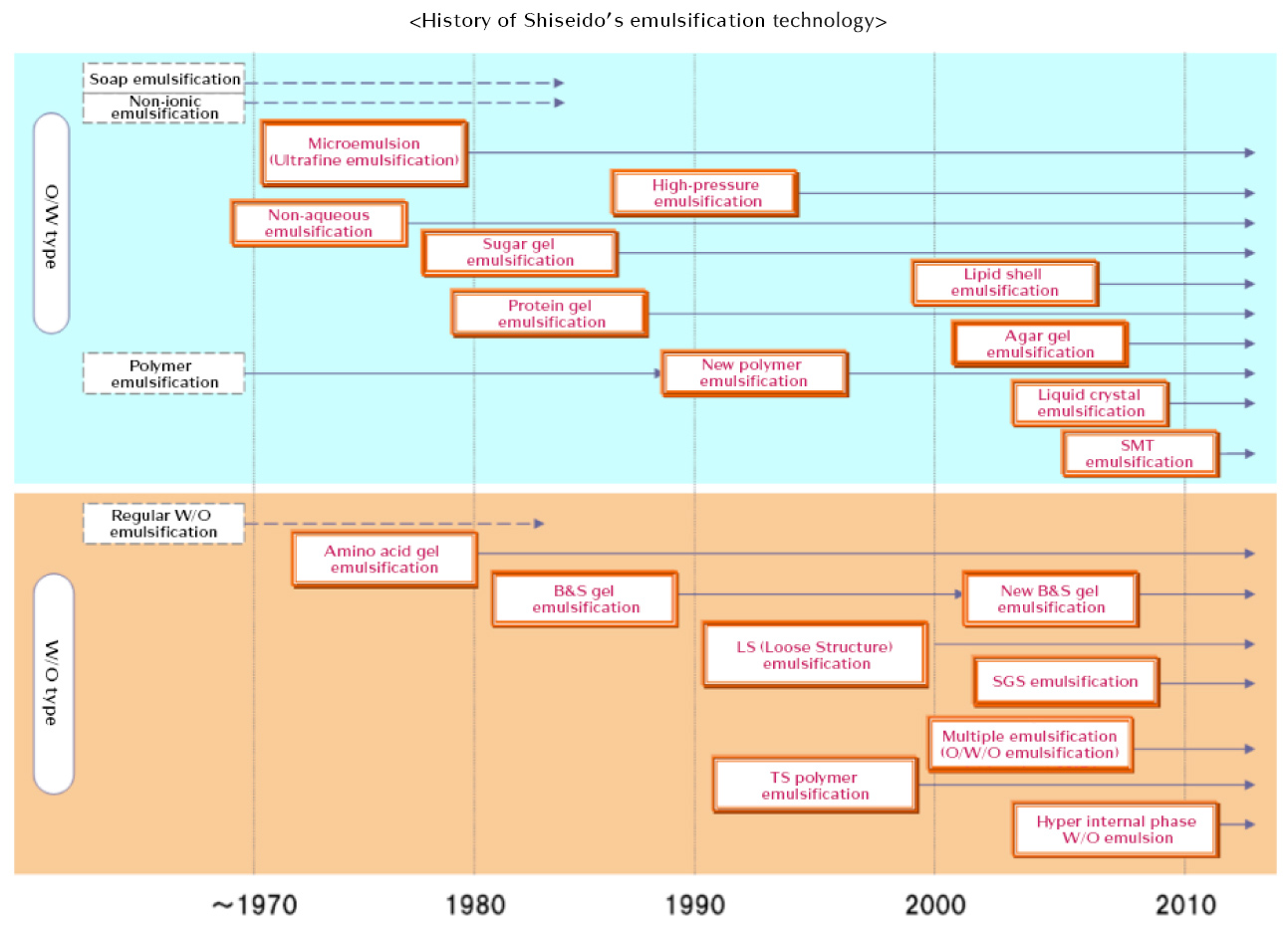 The following are some examples of the latest unique emulsification technology developed by Shiseido.

Fine particles can be obtained with high pressure emulsification device. Combination of this device and the formulation technology to decrease interfacial tension between oil and water makes it possible to refine the oil particles dispersed in water to 1/30 to 1/500 (minimum size: 30nm) of the ordinary emulsion size. This technology achieves transparent liquid lotion having the same formulation as that of moisturizing rich cream.

This is the photograph of the emulsions of almost the same formulation. The left one with white appearance was the emulsion prepared by conventional method while the middle one of exactly the same formulation as the left one was manufactured by a high pressure emulsification device. The right one with transparent appearance of most suitable formulation was prepared by high pressure emulsification device with creatively devised order of addition.

This technology makes emulsion transparent and remarkably reduces its viscosity. Due to this, we can completely control the appearance and viscosity of the emulsions with the same water/oil ratio. 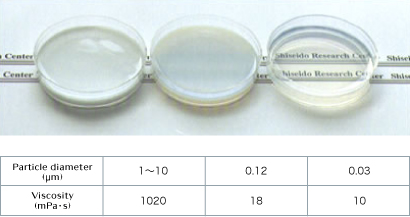 Water and oil separate rapidly when the size of dispersed particles is large, therefore it is common to make particles as small as possible (~50 μm) to keep emulsion stable. However, Shiseido established “Lipid shell emulsification technology ” which can stabilize extraordinary large particles (maximum 4mm), big enough to be visible.

Generally, large emulsion particles cause separation via the process of creaming or coalescence. Therefore, it is difficult to stabilize them. However, this issue was resolved by creating solid oil shells outside of the particles without using surfactant.

This innovative technology achieves an emulsion having a unique appearance (the particles can be seen by naked eyes) and also never-before experienced texture during application. Another advantage of this emulsion is that unstable pharmaceutical agents can be stably kept in the solid oil shell. 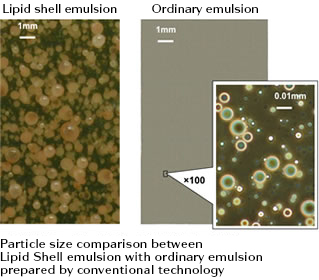 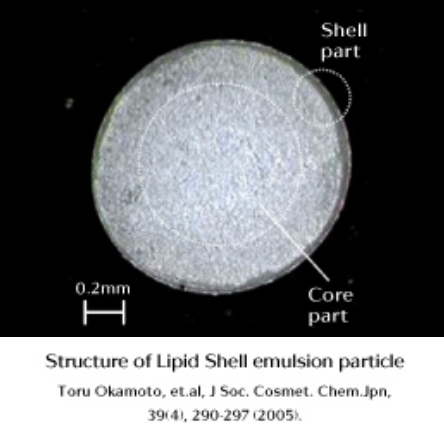 Shiseido developed an “O/W/O type” emulsification technology in which even finer oil particles are engulfed by water surrounded by an outer oil phase, and put it into a product. Such emulsification is called “multiple emulsification”. We developed this technology by focusing on the fact that the stability increases when unstable pharmaceutical agents are contained in the oil particles located in the innermost part. For preparation, an O/W emulsion, in which oil particles of a very fine size are used, is emulsified into another oil phase. This technology achieved unique characteristics including the texture that dramatically changes upon application to skin. 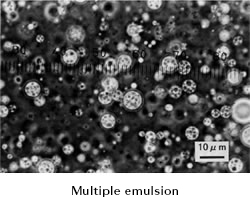 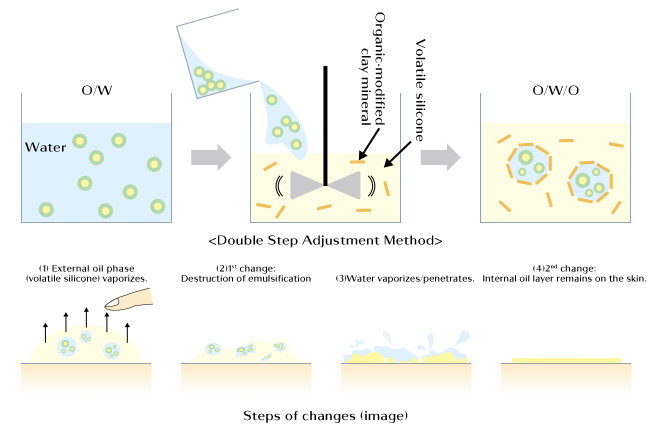 In the past, water droplets were easily coalesced and maintaining stability was difficult in W/O emulsification where oil surrounds water. Shiseido conducted screening on various surfactants. As a result, we discovered that we can stabilize a large amount of water particles (maximum 97%) in a small amount of oil if we use a surfactant that forms “Bicontinuous Cubic Liquid Crystals” by blending it with water, and we named this emulsification “Hyper internal phase W/O emulsion”. This formulation produces the light texture without the unique oiliness and stickiness of W/O emulsification as well as effect for maintaining moisture and flexibility of the skin. 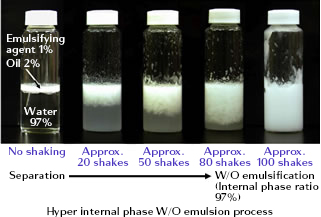 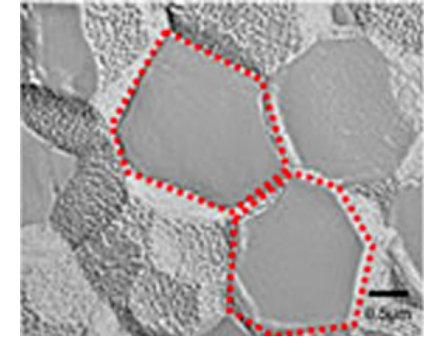 [Structure of hyper internal phase W/O emulsion]
Polygonal areas are water droplets divided by a thin oil film. Normally, the emulsified particles are spherical in shape, however, the amount of water contained is so large that the water droplets are placed in polygonal shape.

Thickeners including water soluble polymer are often used in cosmetics. Their functions are as follows and their properties are very important.

Shiseido has been making efforts for such thickeners based on the 2 ideas of development of new thickener and rheological approach for quantifying texture.
We will introduce specific examples here. 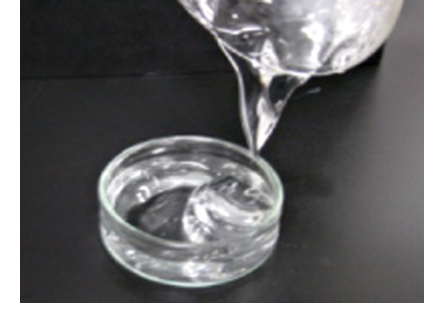 Development of thickener with light/dewy texture

General thickeners are linear or branched polymer. When molecular chains expand in the solvent and are entangled with each other, solution viscosity is increased. In this case, although “rich/thick” texture can be obtained, at the same time, there will be sticky threads, leading to “sticky” texture. Therefore, “light” or “dewy” texture cannot be obtained.
Then, Shiseido focused on the thickening effect of microgel. Tightly closed packed microgels decrease fluidity and increase viscosity. Shiseido utilized this mechanism to develop a new thickener which can achieve “light” and “dewy” texture. 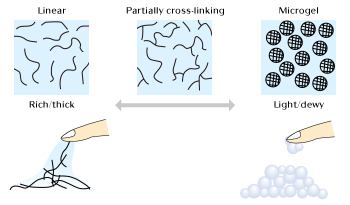 The point for achieving highly thickening effect from microgels is to prepare as small particles as possible. In order to achieve this, we decided to obtain superfine water-swellable microgels using inverse microemulsion polymerization.
In the 3 ingredient system of water-oil-nonionic surfactant, O/W emulsion and W/O emulsion are formed at low temperature and high temperature (border line: phase inversion temperature, PIT) respectively. On the other hand, interfacial tension reduces up to the limit around the PIT; therefore, even with mild stirring condition, extremely superfine emulsion is automatically generated. This method which utilizes this phase as a polymerization is called inverse microemulsion polymerization method. 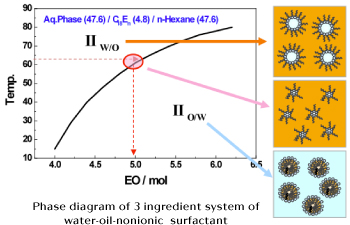 The microgel water dispersions acquired in such a way have smooth and dewy texture. In addition, compared with carboxyvinylpolymer that is the conventional thickener used for achieving dewy texture, it has been confirmed that microgels show higher thickening effect in the area of practical concentration.

Physicochemical evaluation and quantifying texture is very important not only to correctly understand phenomena but also to improve the quality of development and research. Formulations such as moisturizer, cream and gel are non-Newtonian fluid with viscoelasticity, and also many of them have the characteristics of pseudoplastic fluid in which apparent viscosity decreases when stress is induced. Therefore, attempt was made to comprehend texture based on the parameters obtained by Herschel-Bulkley equation that is the empirical formula to express fluid characteristics of pseudoplastic fluid.

n is H-B index here, which indicates pseudoplastic fluid property (shear-thinning). It has been confirmed that the index would indicate “light” and “dewy” texture based on measurement values from various samples as well as sensory evaluation results. However, there are issues regarding detection of detailed differences among samples with dewy texture. Furthermore, this index has no correlation with other textures such as “smoothness”, “moistness”, and “stickiness”. Therefore, parameters which can also evaluate those textures have been demanded.

Therefore, Shiseido introduced the Nutting equation that is the empirical formula to evaluate hardness of complicated fluid and has attempted to use such parameters as the evaluation index for the textures.

In the Nutting equation, the parameter “φ” for hardness indicates that exponential law can be established between time “t” and stress “σ”. α is a time-dependent index and β is a stress-dependent index. For example, if there is no time dependency (α = 0, β = 1), the equation expresses the Hooke's law and indicates a complete elastic body. If a linear expression against time can be established (α = 1, β = 1), the equation expresses the Newtonian fluid and indicates a viscous body. Accordingly, one equation can indicate physical properties including elastic body and viscous body which are the opposite properties.

Here, we conducted the verification regarding 6 serums which had different characteristics. Relationship between sensory evaluation with “5-level value” and Nutting parameters was investigated. It was found that there was a strong correlation among “oily texture”, “light texture” and “sense of penetration”.

Method: Testing at home
Actual implementation period: 9 days
Target: 100 females in their 20’s and 30’s
Test item: 6 serums (P – U)
How to use: Each person used 3 items for 3 days with hands in the morning and night after face wash

As can be seen, use of the rheological approach enabled to quantify the textures of “lightness”, “stickiness”, “oiliness” and “penetration”, which are important for serum texture. By combining thickeners which have different viscoelasticity behaviors based on this approach, textures in cosmetics can be controlled now.