Shiseido has set a mission to achieve 100% sustainable plastic packaging by 2025 based on its unique packaging development policy “Shiseido 5Rs (Respect, Reduce, Reuse, Recycle, Replace)”. In July 2022, we took a big step toward achieving the mission by starting a collaborative initiative to establish a circular economy for plastic cosmetics containers, which are jointly promoted by SEKISUI CHEMICAL CO., LTD. (“SEKISUI CHEMICAL”) and SUMITOMO CHEMICAL COMPANY, LIMITED (“SUMITOMO CHEMICAL”) .
The recycling of plastic cosmetics containers has been considered difficult as they are made from a wide variety of plastics. Today, we interview Yoshinori Kumasaka, Group Manager of Sustainable Technology Acceleration Group at Shiseido Brand Value R&D Institute, and Kenji Ito, researcher in charge, talking about a new technology that realizes container recycling and its implementation process for the future.

―— Please tell us about the background behind the launch of this project. 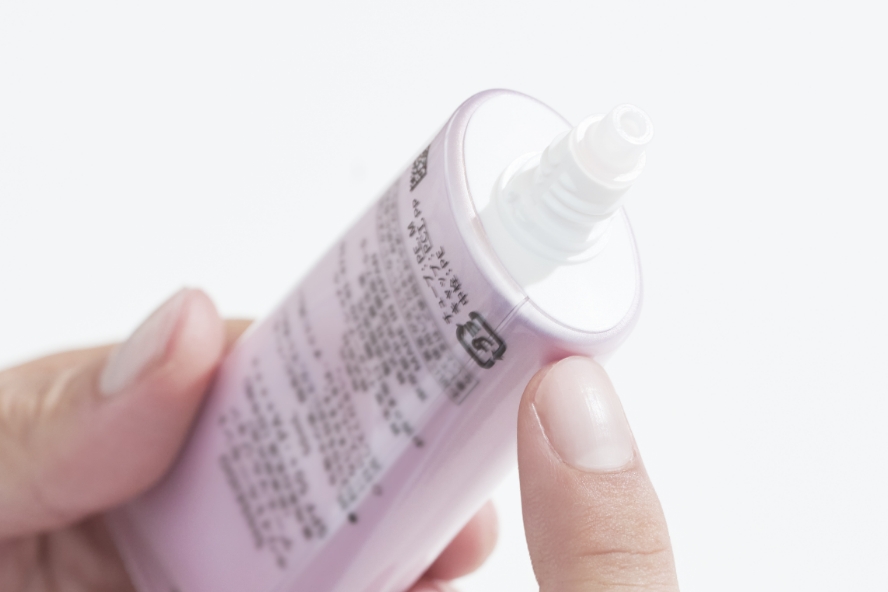 Kumasaka: About three years ago, when the trends toward sustainability were accelerating globally, the Packaging Materials Development Group was established as a team in charge of technology development related to packaging materials. After having a number of discussions and asking advice from various in-house departments, we set a goal of achieving 100% sustainable plastic packaging by 2025. That being said, we were at a loss, having only six years to go until 2025 with no roadmap to follow. Plus, because cosmetics containers are made of a complex combination of various plastics in order to protect the contents while maintaining the design, it was almost impossible to sort and recycle them properly. Just as we said, “Let's do it!”, I was already daunted facing with the reality full of difficulties lying ahead.

―In such a situation, how did you come up with the idea of collaboration?

Kumasaka: Although my mind was filled with the challenges that kept popping up one after another, I stayed on the lookout, actively visiting various lectures outside the company in search of a clue to the solution. Then, I came across the “BR Ethanol Technology*1” developed by SEKISUI CHEMICAL. This technology allows plastics of all sorts to be recycled without sorting. When I encountered this technology, I was thrilled at the thought that this technology would save us outer packaging designers because with this technology, there will be no restrictions on the designing of cosmetics containers. I was so excited and kept note of the information on the presentation screen. Then, immediately afterword, I contacted SEKISUI CHEMICAL, which is how the project kicked off. 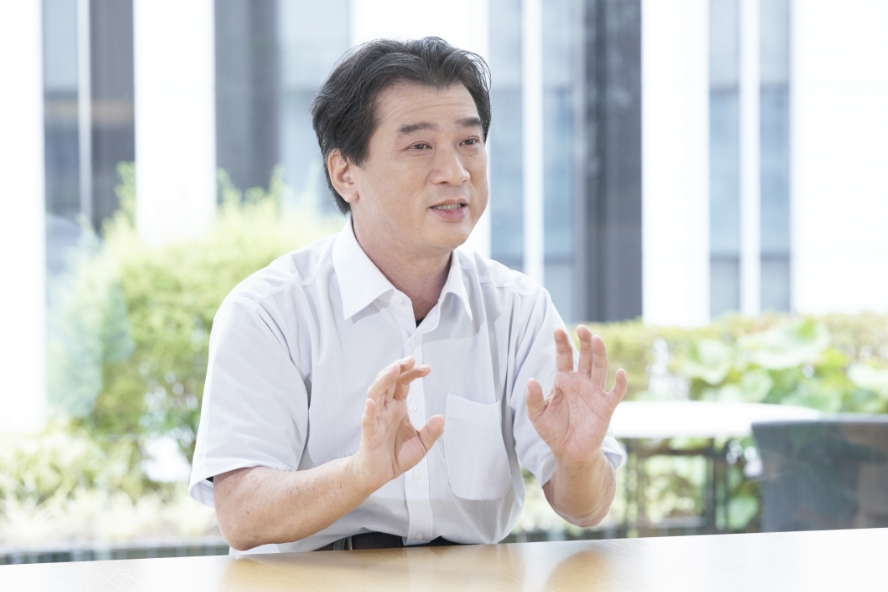 First step toward a “circular economy” of three-company collaboration

―How does the SEKISUI CHEMICAL’s recycling system work?

Kumasaka: In the system, it converts all types of plastics into ethanol through microbial conversion, then uses it as a raw material converting ethanol into ethylene to produce polyolefin (a new plastic).

―What was the distinction from the conventional recycling system?

Kumasaka: Currently, there are various recycling systems being implemented. For example, “cascade recycling” is a technology that turns collected resources into different forms. But in our project, we focused on “horizontal recycling” that, unlike cascade recycling, converts collected cosmetics containers (resources) into raw materials, which will then be reused for cosmetics containers. Furthermore, this technology recycles not only single material plastics but also composite plastics into raw materials without sorting, a process which we are the first in the world to attempt.. We can now depict a circular economy in which we collect containers that users previously discarded as household waste, recycle them as renewable plastics, and turn them into new cosmetics containers that reach users again. I was convinced that this is a system that would allow each and every one of us to feel satisfied in participating in recycling activity!

Start with what we can. Facing the difficulties while pursuing the plan.

―Was this technology ready to be implemented immediately?

Kumasaka: No, not entirely. Actually, when I first came across this technology, we had not yet established a method to convert ethanol into polyethylene resin, although we had a technology to convert plastic into ethanol. So, I set three targets.

Once these three targets are agreed upon, the system for recycling plastic cosmetics containers will be established. In July 2019, we got started, going all out toward this goal.

―What actions did you actually take toward these targets?

Kumasaka: As for the first target of “finding a means to convert ethanol to polyethylene resin”, SEKISUI CHEMICAL and SUMITOMO CHEMICAL collaborated to develop an enabling technology.

―Then, that is how the three-company collaboration with SEKISUI CHEMICAL and SUMITOMO CHEMICAL began, advancing the cross-sectoral collaboration, right?

Kumasaka: That’s right. This project is a huge “circle” on a social scale. We simply cannot do it by ourselves.
Ito: Both SEKISUI CHEMICAL and SUMITOMO CHEMICAL are basically B2B companies, but we at Shiseido have contact points of products and stores directly reaching consumers. So, I thought that we could expand the possibility of building a circular economy for plastic containers by acting as a “link” between these two companies and consumers.
Kumasaka: What we need to do is to “collect” and “reuse”. One of the biggest challenges is designing a workflow for in-store collection. 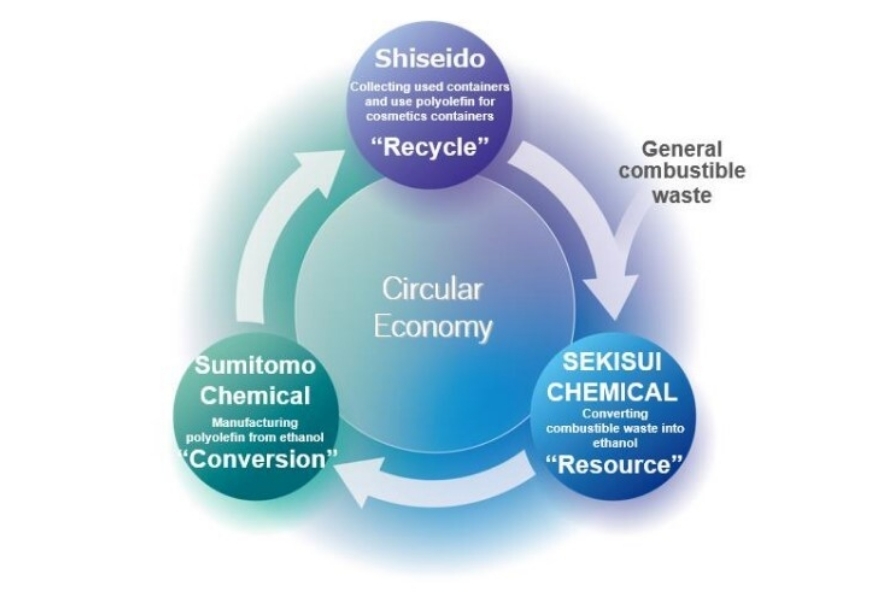 ―I’ve heard that you are working closely with other in-house departments to advance this project. Is that true? 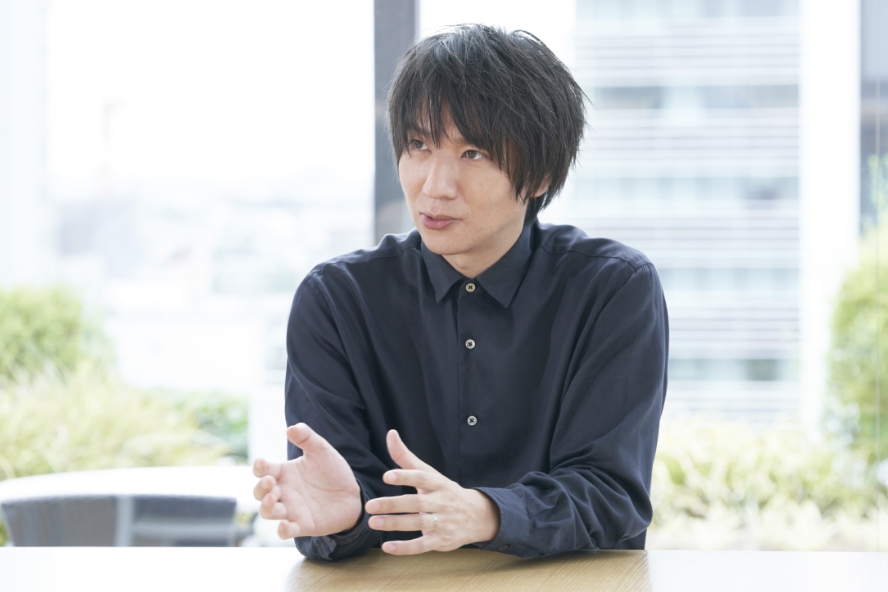 Ito: Yes, at the Institute, we do basic research and product development, but we do not have any know-how regarding in-store operations. So, we discuss and cooperate with Shiseido Japan teams who are actually in charge of in-store operations such as sales, logistics, and others. Actually, we had a series of difficulties until we established the project structure. This project is inevitably costly, and new operations will be required at the storefronts. However, instead of worrying about these negative factors, I tried to deepen the understanding within the company by carefully explaining that Shiseido’s contribution and leadership in circular economy would help create the corporate image of leading sustainable activities in the industry and boost consumers’ appetite, making people more willing to buy Shiseido products in the future. We will break through difficulties through “knowledge fusion” from various perspectives, which is another rewarding aspect of this project.

―Are there any differences in viewpoint and sense of trouble/challenge among the departments?

Kumasaka: Yes. For example, just for one single pilot deployment scheme for container collection, they have different ways of thinking in selection of target areas and costs, etc. That is why we must actively exchange opinions with each other to reach an agreement, which is exactly what we are doing now.

―Are you actually taking any concrete actions toward in-store collection?

Ito: Yes. Until now, used cosmetics containers have been thrown away. As there are various legal restrictions on waste handling, we have acquired knowledge on these restrictions first and communicate with the government agencies as necessary to comply with the restrictions. We are currently in the process of resolving issues one by one in order to realize a scheme in which container collection is completed in cooperation with stores, transporters, and disposal companies all commissioned by Shiseido.
Kumasaka: In the future, we would like to cooperate with government agencies to share our passion for this project, expanding people’s awareness of its significance and leading to a change in consumer behaviors.

In the near future, this project will change the earth and people.

―Once this project is realized, how do you think society will change?

Kumasaka: Cosmetics are used for making people beautiful and healthy. However, if the leftover containers of these cosmetics are posing a burden on the earth, that is a sad reality. We want to be beautiful and healthy and want the earth to be so too. In our division, we set a vision of “beauty for the earth and people”, and we will take the lead in expanding the container collection project throughout Japan and the world, building a circular economy, and aim to establish it as a recycling-oriented social infrastructure.
Ito: We would like to take the initiative in designing and introducing a system that will change people’s understanding of cosmetics containers, which used to be thrown away, into one of “renewable resources”. It is important for us to inspire people to understand the necessity of a circular economy resulting in a change in their awareness and behavior for the sake of the earth and our environment, as well as for the future of our children. Our project may be a small action, but I believe this will lead to a bigger scale of environmental consideration.

―Finally, what do you think of the significance of this project? What are your thoughts?

Kumasaka: Once this project has succeeded, engineers will be able to design containers more freely. If we balance recycling with containers’ functions such as design, usability, and stable contents, we will be able to provide consumers with more-satisfying, easy-to-use cosmetics. If people notice Shiseido leading the circular economy and become fans of Shiseido, I would be grateful. I think that is where the significance lies, and it also gives me motivation.
Ito: If our efforts lead to the preservation of the global environment, even if only a little, it will surely bring joy to many people, and I believe this is the significance of the project. As a researcher, I am not only engaged in research and product development, but I can also take part in dynamic initiatives that can influence society as a whole because Shiseido has a culture of freedom. We can conduct research while being at the cutting edge of the global trend toward a sustainable future, and that means a lot and inspires me.


Sustainability Report 2021
Back to Shiseido Talks