Shiseido Company, Limited (“Shiseido”) has discovered for the first time that men develop wrinkles at the corner of the eye more than 10 years earlier than women by utilizing a three-dimensional wrinkle analysis based on the replica method*1 and its proprietary statistical analysis*2. For many years, Shiseido has been conducting research on skin physiology and preferences by users’ age and gender, clarifying various differences between men and women in skin physiology*3. This time, our finding is thought to be caused by “skin physiological characteristics”, in which men are more sensitive to oxidative damage and UV rays than women, and “lifestyle characteristics”, in which men have different attitudes toward skincare and sun care from women. In other words, characteristics-based skin care and early anti-aging care may be possible to help people achieve healthy and beautiful skin in his or her own way.
Going forward, Shiseido will continue to deepen its research on skin physiology and preferences of users, and introduce unique approaches that can realize the individual beauty of diverse people, which only Shiseido can realize.
*1 A method for examining the unevenness of wrinkles via a replica of wrinkles created by applying silicone resin onto the skin.
*2 Patent pending
*3 See Related News Releases at the end of this release. 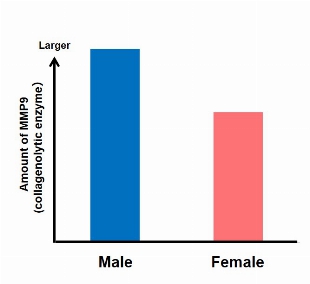 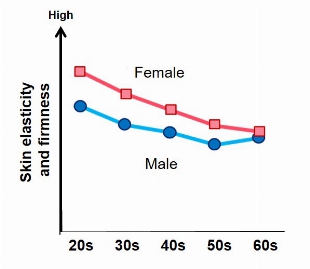 Differences between men and women in the dermis

This time, we newly confirmed that the amount of MMP9, an enzyme that degrades collagen and other substances in the dermis that are responsible for skin elasticity and firmness, is higher in men than women (Figure 2). It is known that MMP9 increases with skin damage, suggesting a relation to the fact that men have higher microinflammation indexes than women.
In addition, we conducted a survey on the indexes of skin elasticity and firmness in the deeper layers of the cheeks (mainly the dermis) with men and women in their 20s to 60s, and the results showed that men had lower indexes in all age groups, especially significantly lower in the 20s to 40s (Figure 3). 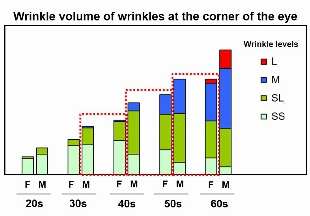 Figure 4: Comparison in wrinkle volume at the corner of the eye by age group 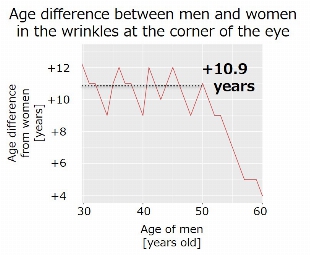 Figure 5: (Estimated) Age difference in wrinkles at the corner of the eye via Shiseido’s analysis

We transcribed and measured the wrinkles at the corner of the eye of Japanese men and women using the replica method, and compared their wrinkle volume based on our unique wrinkle level criteria*4. The results revealed that men were larger in wrinkle volume and their wrinkles were more likely advanced in all age groups. Particularly in the age group of 30s to 50s, it was confirmed that the distribution of wrinkle volume was similar to that of women in the group one generation older (Figure 4). Then, we calculated the age difference between men and women in the formation and development of wrinkles via our original analysis method, and it was estimated that men in their 30s to 50s form and develop wrinkles 10.9 years earlier than women (Figure 5). In addition, after extracting representative samples, which were close to the average value of each age group of men and women, from the 3D analysis of the actual replicas and comparing them, we confirmed that wrinkles (indicated in green) develop earlier and are more likely to be deeper and larger in men (Figure 1).
*4 Wrinkles are categorized by level according to the following criteria:
Wrinkle level SS small wrinkles (small): wrinkles with an area of smaller than 1.0 mm2 and a depth of less than 110 µm
Wrinkle level SL small wrinkles (large): wrinkles with an area of smaller than 2.0 mm2, a depth of less than 180 µm, and do not fall into wrinkle level SS.
Wrinkle level M medium wrinkles: wrinkles that do not fall into wrinkle levels SS, SL, or L.
Wrinkle Level L large wrinkles: wrinkles with an area of 4.0 mm2 or more and a depth of 360 µm or more. 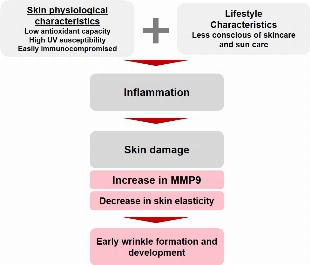 From these study results, it is inferred that the difference in age-related skin change between men and women is caused by a high susceptibility to UV rays and oxidation, and an associated increase in inflammatory index.
In order to prevent the aging of male skin, it is important to use sun care products that protect the skin against UV rays and oxidative stress, and anti-aging care in the 30s or even earlier, when wrinkles become visible, may achieve healthy and beautiful skin and enhance the appeal of male skin.
Going forward, Shiseido will apply these findings to propose new approaches based on the skin physiology characteristics of men. 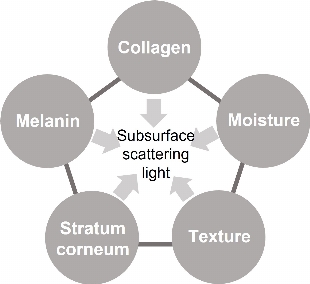