The sense of security about work and childrearing and a good balance between the two is important for both men and women in order to create a society where anyone can take an active part. However, Japanese society today is facing big issues as women struggle to return to work due to lack of nursery and lose work opportunities.

With “to inspire a life of beauty and culture” as its corporate mission, Shiseido aims to play the role of a close life partner for women. In sync with this aim, the new company will provide enterprises interested in in-house nursery operation with such Shiseido’s experience and know-hows as balancing work and childrearing and internal female empowerment system, as well as JPHD’s expertise in childrearing support. At the same time, the new company will cooperate with Doshisha University Center for Baby Science to conduct researches on behavioral development of children and will aim to create an appropriate life rhythm for both children and parents.

At present, Shiseido is planning to set up a new in-house nursery on its Kakegawa factory site in autumn 2017, and has applied for “Company-led childcare business” program of the Cabinet Office. This in-house nursery will be the first project of the new company. The nursery will be available not only for Shiseido employees but also for residents of the neighboring areas. Going forward, the new company will offer services nationwide through entrusted operations with various companies. 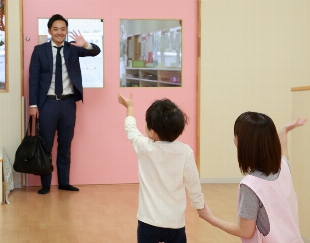 【Father picks his child up at the nursery (Image)】

Childrearing in Japan
Childcare is gathering much attention in the society due to concerns over the low birthrate and promotion of female employment. However, the number of children waiting for admission to a licensed nursery has been exceeding 20,000 yearly for six consecutive years. Although the number of nurseries and places in them is on increase, changes in working styles of modern parents make waiting for admission a continuous social issue. As one of the measures against the scarce number of nurseries, Japanese government introduced a new “Company-led childcare business” program in 2016 to offer sufficient support to in-house nurseries operated by enterprises at the same level as to licensed nurseries.

Comment from Shiseido
With the aim of accomplishing the corporate mission of “inspiring a life of beauty and culture”, Shiseido has been developing various businesses to help women to live a beautiful fulfilling life.
Meanwhile, Future Creation Center, a business department in Shiseido headquarters engaged in developing the picture of the company’s future towards realizing the mid- to long-term business plan VISION 2020, implemented an internal initiative, Future Creation Marathon to discuss with employees nation-wide about the future goals of Shiseido. Through this activity, we learnt that many of the employees who had struggled to keep a good balance between work and childrearing want to be involved in offering new values for those who find themselves in the same situation.
In line with this action, Shiseido has conducted hearings with consumers, childcare-related professionals, government, academia, medical institutions and NPOs to solve the issues. These hearings revealed that female employees receive inadequate support, especially at the time of pregnancy and childrearing, and we reached the conclusion that in-house nurseries could help to create a harmonious life rhythm for both children and parents. In this regard, Shiseido has decided to engage in childcare business, believing that companies could offer such values to their employees through in-house nurseries.
Shiseido relies on JPHD, which has expertise in childcare and acts as a leading company in the childcare business, as a valuable partner. This agreement of joint venture was reached as JPHD had the same standpoint and was also seeking new value creation in the areas of childcare and working life.

Comment from JPHD
JPHD has been providing childcare support centering on the operation of nurseries and after-school activities to create a society where parents feel comfortable and secure to have and rear a child. While pursing the best, through updating childcare facilities and thinking what we can do to make children happy, we have met a lot of parents who seek best possible activities beyond just childcare.
“Company-led childcare business” program was introduced in April 2016 to promote childcare support. Unlike the conventional operation of licensed nurseries, which JPHD has been focusing on, it allows companies to provide support for both parents and children. JPHD believes that this program gives us opportunities to offer new values to society.
JPHD regards Shiseido as a company that offers affluent services to support individual lives of people and continuously responds to the changes in consumer awareness. As Shiseido made a step forward to offer childcare and childrearing support, JPHD has found a new partner to share the value. With this new joint venture, we will also provide life support in a broad sense, not limited to childrearing only.


*The term “in-house nursery” in this press release describes any kind of nursery facility operated by a company or on the premises of a company, regardless of its operating license.
*The number of children waiting for admission to a licensed nursery varies with area. 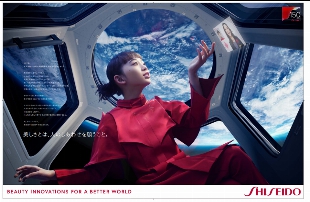